We are delighted to announce that Liane Carroll will be performing at All Saints Church as part of the 2019 Lindfield Arts Festival on Thursday 19th September. Book tickets now! 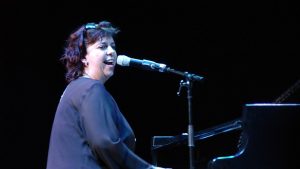 Her illustrious career has seen her tour the world including an appearance at New York’s renowned ‘Jazz at the Lincoln Centre’, being awarded an highly coveted ‘BASCA Gold Badge Award for Services to British Music’ (2017), appearing at The Royal Albert Hall for the BBC Proms (2016) and being a regular headline performer at Ronnie Scott’s Jazz Club, London for more than 25 years.

Liane’s most recent album ‘The Right to Love’ (2017) reached no.1 in the iTunes jazz charts and received rave reviews including four stars from The Guardian, The Irish Times and The Evening Standard. Along the way she has collaborated with such diverse artists as Paul McCartney, Gerry Rafferty, Long John Baldry, Ian Shaw, Claire Martin OBE and drum and bass outfit London Elektricity.

This is an event NOT to be missed.

Join us for an evening of music with Liane Carroll at All Saints Church, Lindfield on Thursday 19th September 2019! Tickets can be booked here and more information can be found on our event page here!