Be on the look out!  The festival programme has some exciting things to see and do. No more so than a live Cellograff* installation outside Abbott’s chemist, in the High Street on 21st September.

Sarah Gillings is S.O.S, an award-winning multimedia and street artist.

From Disney designer to Street Artist. 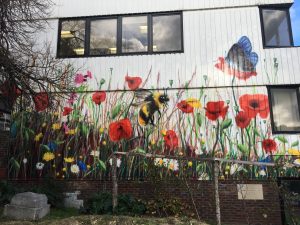 S.o.S has been a footwear designer, an advertising agency director and many other creative roles in her life. Her journey into public Arts interactions began humbly hosting an Artists’ Open house, staging public art exhibitions, promoting other artists and finally becoming a professional artist in her own right.  Her style of work in the street brings together ideas of branding, marketing, icons and advertisement into her artwork, which often portray women as the central element in the composition. Her Cellograff* interventions also include British wildlife in unexpected settings and this is the type of work that she will be creating for Lindfield’s festival.

*Cellograff is a technique where cellophane is stretched between any available support making paint-ready surfaces.  This provides a freedom to create murals in a variety of new locations without the restriction of needing a wall.  The translucent nature of the plastic adds a fascinating layer of visual complexity to the mural.  S.o.S has been using this technique for the last year.

In 2015 S.o.S was awarded a First Class Honours for a Master of Arts program in Inclusive Arts Practice (IAP).  IAP is using art practice for positive social change.

S.o.S won 2 awards in 2015, for a public art design commission at the Brighthelm Centre and the 2015 BrightSpark Award for innovation and original ideas for inclusive spray-paint workshops.

In 2016, S.o.S was offered a place and funding at The School for Social Entrepreneurs to developer spray painting charity. 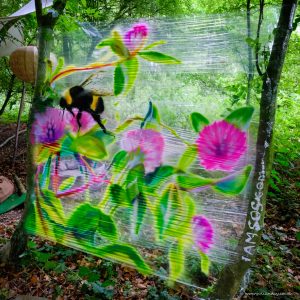 In 2017 S.o.S founded the UK’s first dedicated spray-painting charity.  Raising funds to provide Therapeutic Arts for those disengaged from society.

Poi Passion Circus Arts
Next Post: Italian food at its best and all for the festival