Can a boy be best friends with a beetle? Meet MG Leonard and discover the truth.

Thirteen-year-old Darkus Cuttle’s search for his kidnapped father leads him to discover a mountain of extraordinary beetles, and pits him against the mad-scientist of the fashion world, Lucretia Cutter, an haute couture villainess with an alarming interest in insects. A darkly hilarious adventure full of exotic beetles, daring schemes, and true friendship.

M. G. Leonard is an award-winning, bestselling writer of children’s books. Her Beetle Boy books have sold in forty countries and she is currently writing the screenplay for a TV series based on the trilogy. She and her beetles have appeared on Blue Peter, Springwatch Unsprung, Countryfile, Meet the Author with James Naughtie, Sky News, and featured in the BBC documentary, The Bug Couple. 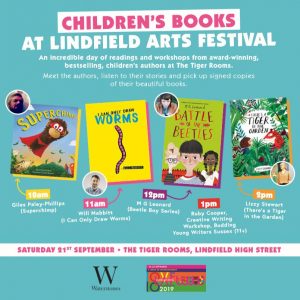