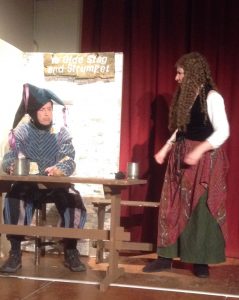 Yorick the Jester in Shakespeare’s Hamlet is not dead – he’s on the road dying a death as he pioneers a new kind of comedy called stand-up.

When he fails, he is persuaded to return to Elsinore to get his old job back. However, he finds himself embroiled in Hamlet’s plans for revenge.

A short snippet from the Spring production.